09 May Drone Industry – Crossing the Chasm from Innovators & Early Adopters to Early Majority..

Posted at 15:48h in News by MzansiAeroTech 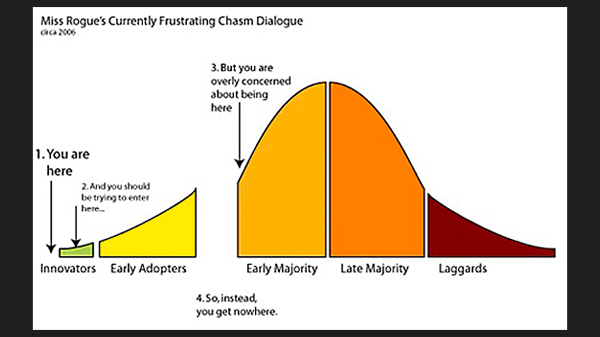 The body of knowledge in the technology world is awash with literature on how the drone technology will change the way we live, work and play. Every day we read about new use cases of drone technology and also the equal push back from the privacy rights activists. In the beginning to the middle of the last decade, the drone industry was stuck in its two extremes, i.e. toys on the one hand and weapons of mass destruction on the other (thanks to Uncle Sam’s proxy wars in the Middle East). Towards the end of the last decade we saw a sharp rise of the adoption of this technology in areas like security & surveillance, oil & gas, construction, precision farming, etc. Looking at the Gartner Hype Cycle one can see that the technology has emerged from the “trough of disillusionment” and is now in the early stages of the “slope of enlightenment”. We can safely say that the industry has turned the corner of the hockey stick and is on the rise.

But why are we not seeing mass adoption in the mainstream sectors like construction? Given the fact that drone technology is still relatively cheaper than hiring cranes and other yellow fleet in construction projects, one would expect major construction sites to be a buzz of activity for drones. In South Africa we have over 60 licensed drone operators, but most of these start-ups are either dormant or are struggling to find work.

The industry is still stuck with innovators and early adopters and is battling to “Crossing the Chasm” (Moore, 2014) from early adopters to early majority. Whilst it is encouraging to have these “earlyvangelists” (Blank, et al; 2012) and who represent about 13% of the market, they still have limited clout and buying power within their organisations. However, marketers shouldn’t dare ignore them because they give their products a chance to be tested with an organisation. Early adopters and innovators can also be a sounding board to the pragmatist in the early majority group.

Every start-up’s that has developed its minimum viable product (MVP) dreams of transitioning from Problem-Solution Fit to Product-Market Fit and this happens when their products start to become accepted by the often sceptical early majority. This is our mission in the Mzansi Drone Accelerator. We are currently working with 13 drone start-ups that will soon be knocking at the doors of the early majority once they have completed validating their MVPs with the early majority. When the industry finally cross the chasm, we will be ready to exploit the first mover advantage.